06:19
CEST
We are looking to recruit the following
Low 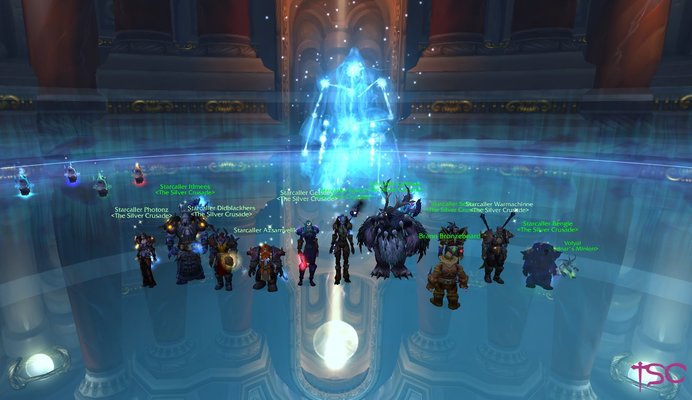 Congratulations to the new Starcallers. We nicely fused a group together and went for it again. The journey was undisturbed by many wipes until we reached Freya. Instead of rooting for us, showing some sort of benevolent defeat, she smacked us for an hour or so. No more herbal tea for me, thank you very much!

The sage idea (last herbal pun, I promise) to move to Algalon was immediately embraced, as we needed to see things in a fresher perspective. The fight brought about old and new challenges but we were happy to see that Cosmic Smash didn't hit its target but once or maybe twice. Gosh , I think Perky is rivaling an army sergeant in the number of times he said 'move' during our guild life in Ulduar. Algalon went down and no shaman was hurt during the production of this encounter.
Back to Freya, new additions to the group and new found spring in our step helped us defeat the green fingered lady.

Ulduar Monday became a projection of a future state of affairs, the bringing about of which becomes an orientation for action by our guildies. Raiding is thus a structure of care to which players in the raid get emotionally invested over time. The fact that we play on an end game content server makes the progression seem futile and the immediate gain and end reach are the only mantras. The raiders dont have to keep pace with game changes, as there are none, so whats left to do? The decomposing of this world by means of addons doesn't help either, all the architecture of Mimiron's wing almost gets lost as the 'mods' alterate the beautiful environmental spells and turns them into bars and numbers.

So, I invite you to consciously take what you desire from the game. Personally I go for the challenge and I know I am not alone in this. The Ulduar runs in Icecrown svr will always reveal my peers, we all in there thinking how hard it is, how efficient we could be, how much we could push damage, how we could survive, why the hell didn't we go sooner/later in that blackhole? The common goal in the near future (aka today) is Yog one light. Could we do it?

Page 1
You do not have permission to shout